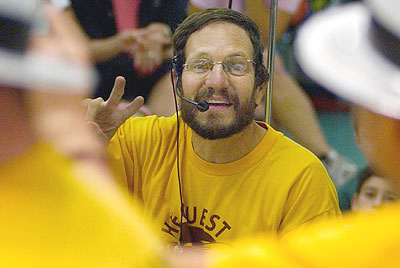 The ancient Hebrew faith is popularly known for being grounded in deliberate rituals, such as the lighting of the Menorah and solemn readings from the Torah, perhaps the most venerated of all works of Judaica. Yet from the days of King Solomon, the devotional life has also been celebrated with the art of ecstatic prayer, chanting and cantillation, or song. One of the more well-known spiritual epigrams of any faith is Psalm 98:4, which compels one to "make a joyful noise unto the Lord... make a loud noise, and rejoice and sing praise."

But one doesn't need any religious dogma to appreciate the beauty of music, a story well told and the value of service to others. Chabad of the Beaches is hosting a performance and speech by Dr. David Lazerson (aka Dr. Laz), "Skullcaps 'N Switchbladeds," for its annual Pillars of Strength tribute dinner, which honors community members who have performed outstanding service to society. Dr. Laz will focus on his experiences as an inner-city Buffalo, NY public school teacher, performing a few original songs he wrote with his racial harmony group, Project CURE.

That's just a glimpse of Dr. Laz's skills that pay the bills, however. He's appeared on both Phil Donahue's & Montel William's shows, been inducted into the National Teachers Hall of Fame and is a university professor, played at Madison Square Garden and at the Democratic National Convention, written numerous books and articles, founded a multi-ethnic fusion band and even performed at Woodstock reunion shows. His acclaimed memoire, "Sharing Turf," is a meditation on race relations chronicling the 1991 riots that erupted in Brooklyn's Crown Heights neighborhood. The Showtime network produced the film "Crown Heights," based on Dr. Laz's book, which aired in 2004 and starred Howie Mandel as Laz.

Asked about his own inspirations, Laz is direct about his life's work. "My intention is to help improve people's lives on whatever level I can - whether it means helping to bring joy into another's life or showing them how we are all connected and part of the 'master plan,' or helping them to empower themselves to become more productive and lead more positive lives."

For those unfamiliar with what Chabad is, Ponte Verde's Rabbi Nochum Kurinsky explains, "Chabad is a Jewish educational and outreach organization... we are active in all areas of Jewish life. Chabad is a place where people go when they something positive, be it a place to study, a synagogue or a warm, friendly atmosphere at our Shabbat dinners." In addition to entertainment, Chabad offers classes throughout Jacksonville at four centers, and provies social services in the form of recovery meetings, counseling, prison visitations and teen drug and alcoholic prevention.

It might seem like a bit of culture clash having a religious organization host such a hipped-out performer. Asked how his psychedelic past fits with his current Jewish spiritual life, Laz explains that the roots of his inspiration have changed. "My acid-rock group was known as The Dendron back in my college days during the late 60's and early 70's," he says. "We played for Timothy Leary, the poppa of the LSD drug scene. That was his motto - 'Turn on, tune in & drop out' - and yeah, it became mine as well during those wild and crazy times. Now I 'turn inward' and find spirituality, 'turn on' to the amazing depth and beauty of Torah, and 'drop out' of the rat race of 'modern' society of pursuing fame and fortune."

For Laz, performance is the fastest connection between music and spirituality. "Music is the language of the soul, our very essence," he says. "In my work with students with profound special needs, I've seen music work absolute magic. And in my work with diverse cultures, music is the great unifier."